This summer, the artists of De Machienerie – known for their installation-based performances – will be making the leap from theatre stages to festival stages with Odysseus. This time it’s a show ‘to sit and watch’. A bit different from their last show, Carnivale, where interactivity was practically the central theme. What follows is a conversation about the different forms of performance, the role of the audience and international collaborations. The common thread throughout being education and the omnipresence of machinery. 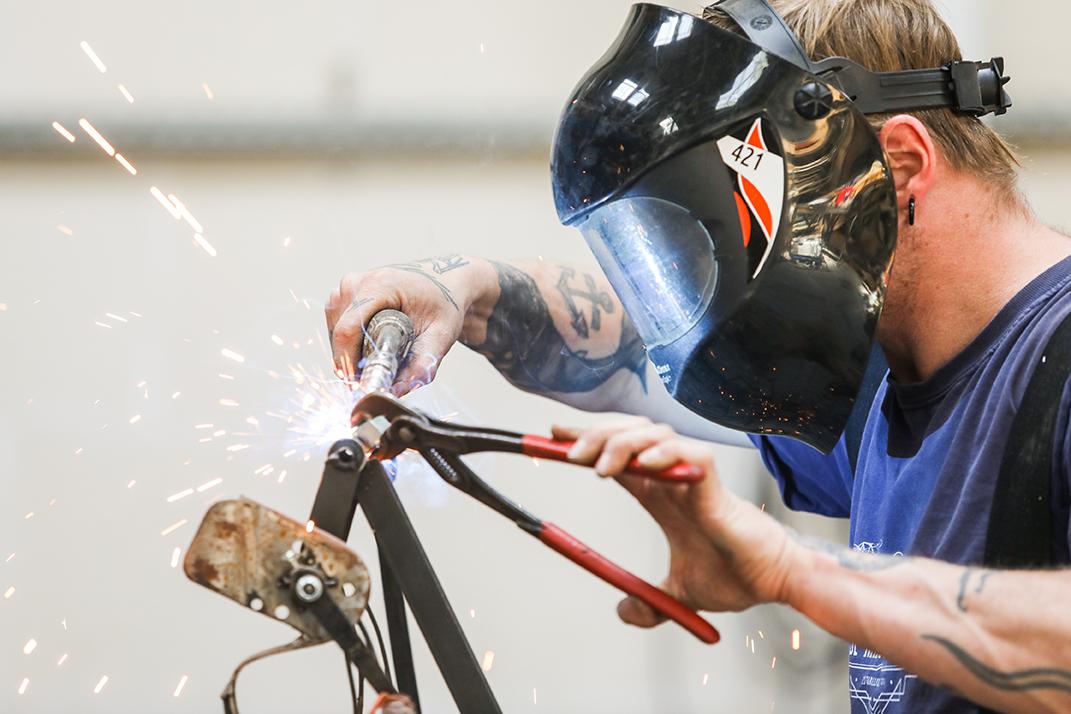 Parks service unearths mammoth in Hoboken. The remains of a woolly mammoth have been found in Antwerp’s Broydenborg Park. It was during routine maintenance work that the district’s park’s service came across the animal’s remains. Archaeological excavations will take place over the weekend.

The images on the Gazet Van Antwerpen website show archaeologists who bear a striking resemblance to Maarten and Joris Janssens, two artists from De Machienerie. Not trained archaeologists.

Maarten Janssens: “We like constructing installations and the local government of Hoboken knows it. They wanted a publicity stunt to announce the exhibition of a mammoth skeleton found in Hoboken in 1862. They called on us to develop the stunt.”

Joris Janssens: “For three years we worked on a replica of the mammoth. In consultation with palaeontologists, geologists and the natural history museum, we reconstructed the skeleton based on casts of the pieces that were once found here in Hoboken.”

And, finally, the time had come: for four days straight, from morning till night, the brothers were invited to join an excavation together with real palaeontologists and geologists. Or, rather, to stage an excavation, lead archaeology students down the proverbial garden path and field difficult questions about a topic they know nothing about. Their performance started early in the morning and ran for a whole day, without interruption. Nothing new to them, since they did the same with Carnivale, a performance that is dependent on the people passing by, on the questions and happenings that arise in the moment.

The Janssens brothers started out 22 years ago as Circus Carot, a bunch of oddballs who’d liven up parties with juggling, fire-breathing and unicycling, and who were among the founders of the Antwerp youth circus Ell Circo D’ell Fuego.

Joris: “On the one hand, we were interested in the pedagogical aspect of a youth circus. On the other hand, we were fascinated by the making of installations. Our technical-school background gave us the basic knowledge to design constructions ourselves. Add to that an enormous desire to build new things all the time: Chinese poles, teeterboards, trapezes, you name it.” 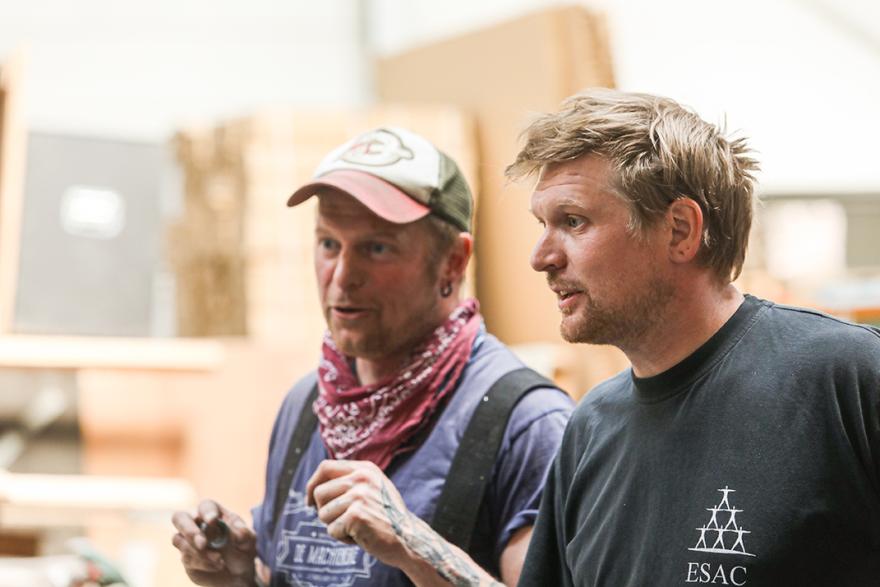 Maarten: “We would watch circus shows together and afterwards we would sneak on stage with our folding metrestick. Like this we’d gather all the information we needed to reproduce the installations ourselves.”

Joris: “Building things turned out to be what we like to do best, but always with a goal in mind. We thought: how can we do something that combines our creativity and our ideology with materials like wood and metal? Something that kids would find entertaining? And so our carousel was born, which we used to as a child-friendly way to talk to kids about the world and the oceans.”

The carousel kept expanding, eventually becoming their own carnival village, a collection of extraordinary installations, absurd intermezzos and wonderful attractions that are operated and manipulated by a strange carnival folk, as well as the visitors themselves. An installation-based show that presents beautiful, self-made installations, but where ‘performance’, in the ordinary sense of the word, takes a backseat.

Lisa Patoor (responsible for distribution at De Machienerie): “The whole Carnivale is actually a four-hour performance. Things are happening on, in and around the installations the whole time. The artists are constantly busy performing and responding to what visitors say and do. It’s even more intense than just presenting a finished work. It’s not unusual for circus festival-goers to remember Carnivale better than the shows they went to see.”

Maarten: “It’s an opportunity to do somersaults, which is fun. But you can also make installations, which are also fun. You take the audience into another, magical, sometimes even poetic, world. That’s what it’s all about: we really keep the circus aspect of it at the forefront. We maintain that specific circus atmosphere that you won’t find anywhere else.”

Joris: “The circus is coming to town. That atmosphere.”

With their new performance, Odysseus, De Machienerie has opted for a different approach, that of ‘let the spectator sit and watch’.

Maarten: “This is the result of our collaboration with Théâtre La Licorne (Dunkirk, France). We were invited to spend some time there and, thanks to a grant to encourage cross-border collaboration, we were all set to create something with them. After an initial creation period in which we worked with Post-its, snails and masks, Claire (Dancoisne, artistic director at Théâtre La Licorne, ed.) came to take a look. Her reaction: ‘Oh dear.’ She didn’t want to continue working with us in that way. She asked us to take a different approach and to start with text theatre and object manipulation.”

Joris: “We were totally unfamiliar with her way of working. But we did want to give it a chance, to look at things in a completely different way, even if it was perhaps strange to us.”

Maarten: “Suddenly we had to go to a library and dive into this literary world that was unknown to us. A world we normally prefer to stay away from, where the threat of grammatical errors looms. (laughs) Ultimately, we ended up in the world of Greek mythology. The world of sea monsters and Cyclopes was a revelation.” 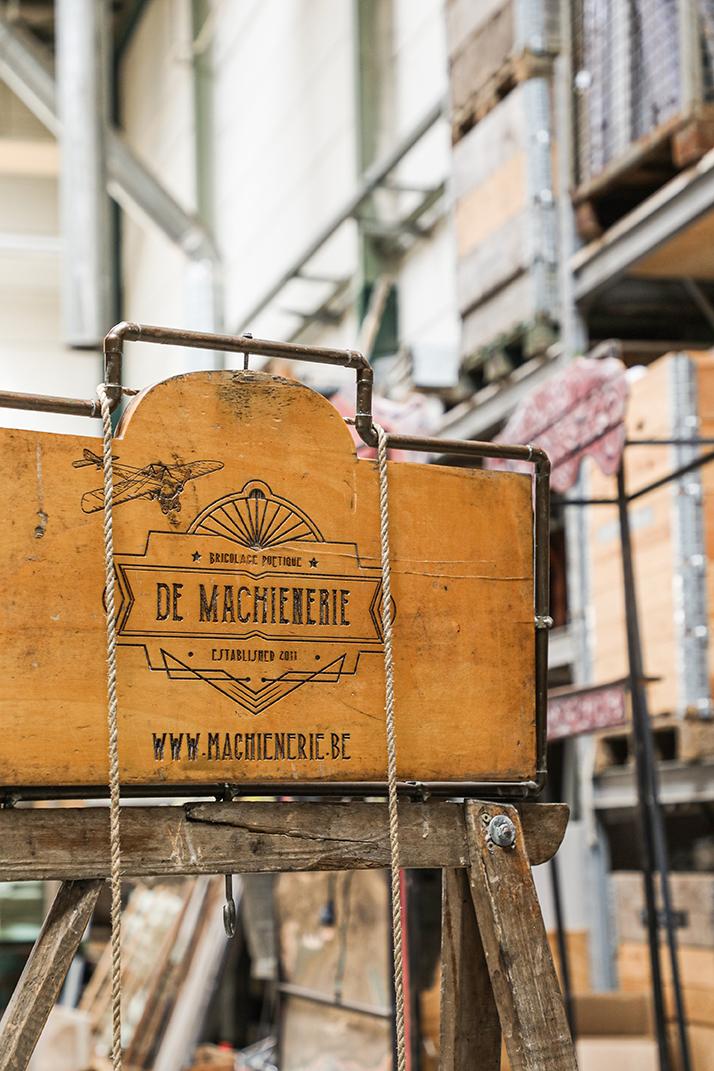 Joris: “The show features about a hundred characters. These characters are not only people; some are objects that are manipulated ... and then there’s the machienerie, of course. Sometimes a machine is the perfect way to portray, for example, an old character whose body squeaks and rattles from head to toe.”

De Machienerie seeks to further strengthen its ties with France in the future, because being programmed in this neighbouring country is very valuable for Flemish companies.

Lisa: “In France, almost every theatre invariably has circus on its programme. Circus and street entertainment are fixtures, they are ingrained in the culture and much more appreciated there than in Belgium. It would be really great for a Flemish company to carve out a place in the French circus scene. But that’s easier said than done since they already have a wide range of their own circus companies and artists. Hopefully the whole Focus Frankrijk project (a project to promote Flemish circus in France, subsidised by the Flemish government, ed.) will be able to change that.”