Jesse Huygh on circus as salvation

Jesse Huygh has lived with cystic fibrosis for years. Some might have guessed his illness would be the undoing of his career, but even COVID-19 was not able to stop him. With the help of an oxygen machine and his partner Rocio Garotte, Jesse has now created A 2 mètres, a show he also intends to tour the care sector with. 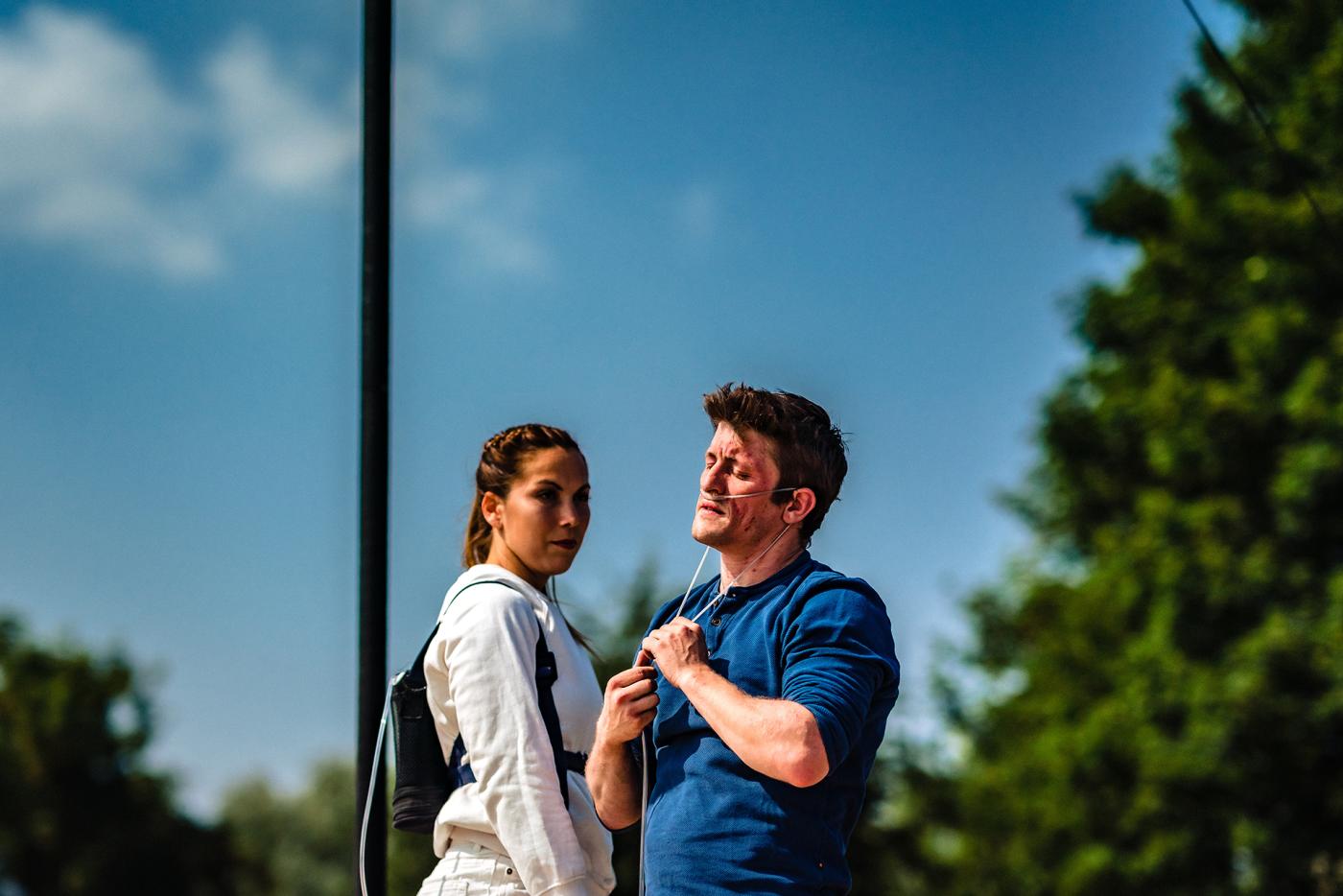 Circus artist Jesse Huygh has found his second wind for A 2 mètres, quite literally. It had become increasingly difficult for him to practise his specialty, the Chinese pole. Barely being able to breath, performing had become almost impossible. But within that limitation, he searched for possibilities and decided to hook himself up to an oxygen tank.

Keeping a distance of one and a half metres may be a thing of the past, but now Jesse’s got a new restriction: staying within two metres of the oxygen machine. His circus partner Rocio helps to carry this mental and physical burden. The harsh reality is made visible by their sensitive performance, but so, too, is hope. The actions of caring and lending support are translated physically for the stage. We see the power of distance to actually connect people.

This is also evident from the many reactions Jesse receives to the show. The mother of a rheumatic patient told him that the performance had convinced her daughter to take up gymnastics after all, having previously thought it was out of reach.

“How does it feel to suffer from CF?” He coughs and clears his congested throat. “Like that. Sometimes it seems like you’re drowning.” Jesse Huygh was diagnosed with cystic fibrosis at the age of twelve. CF is a particularly stubborn, hereditary disorder that results in an excess of mucus being secreted in different parts of the body. Life expectancy is significantly lower, mainly due to lung complications. “Originally, the doctors estimated that I would live to be twenty-five, but I’m thirty now”, Jesse says without flinching. “Circus is my way of living life to the full, despite any limitations. That’s what I want to pass onto the audience: the idea that there is always hope, even if it has to be found via an unexpected route.” To spread this message, not only is he performing his show at festivals and theatres, he’s also developing a version for the care sector that will tour hospitals, sanatoriums and residential care centres starting this spring.

“My health has massively deteriorated in recent years. A bridge that I could cross with ease eight years ago, now I’d have to stop three times along the way to recuperate. Realisations like that are hard to swallow. The mental struggle, more than the physical, is the most difficult part of a degenerative disease (where certain bodily functions gradually decline, ed.). What will it throw at me next? And when will it be the end of the line for me?

“An invisible disease is often met with a lack of understanding. To give you just one example: I have a disability card, but you can imagine the dirty looks I get when I park somewhere and unload a circus pole from my car ... sometimes I’m afraid to show the card. In a Facebook support group, I read similar stories from fellow patients. People are not aware that, as a CF patient, you have to manage your illness for at least two hours a day to be able to function somewhat normally: that means taking nebulised medications in the morning and evening, using an inhaler in the meantime, taking 25 more pills and doing airway clearance exercises (dislodging mucus plugs from the lungs using a technique called ‘huff coughing’). If I didn’t do all that, I’d suffocate.” 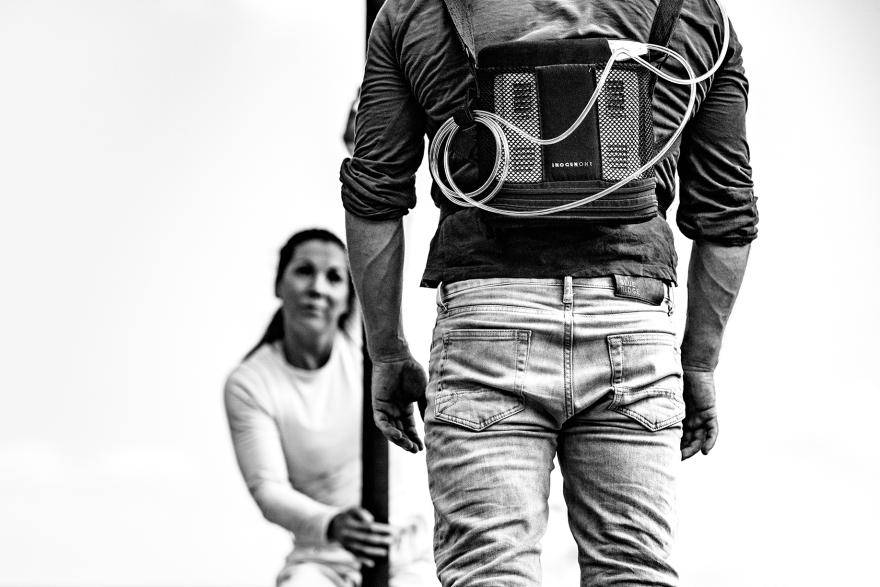 Despite his illness, Jesse has always played a lot of sports and practised circus intensively. “Because, as a CF patient it’s even more important to move your body. The lung is a combination of an organ and a muscle. A muscle that can also be trained. Becoming a professional circus performer was and remains a sincere ‘f*** you’ to the disease, a way of saying: I’m not going to let you drag me down.”

After his time at the youth circus Ell Circo d’Ell Fuego, he went on to study at the ESAC school of circus arts in Brussels. “I made it through the first round by the skin of my teeth, but in the follow-up interviews with the sports physician I had to move heaven and earth to be let in.” After his training, Jesse worked with big circuses like the Canadian Cirque Eloize and the Australian Casus, which took him all over the world. But the luxury of being a performing artist, where everything was arranged for him and he only had to perform his part, eventually started to gnaw away at him, reminding him of his own artistic ambitions that remained unfulfilled. Together with a few companions, he founded the company Collectif Sous le Manteau, under the banner of which they made their first production Monstro, which revolved (literally) around the Chinese pole. However, Jesse had to drop out of the tour when his illness worsened.

“It is nice to see how a collective works in solidarity. At first, we played blocks of four performances in a row, with me performing in just one of them, but then I felt that I couldn’t even do that anymore, that I was becoming dizzy due to a lack of oxygen. I realised that it couldn’t go on like this; I was putting the group and myself in danger. The dates were already fixed and there was the possibility that I wouldn’t be able to perform or that I would even have to drop out mid-performance. I was weighing them down too much and causing complications. It was hard to admit it and let go. The first performance without me was very emotional for me but, at the same time, I knew: even though I’m at the sidelines, we are still in it together. Now, with Collectif Sous le Manteau, we are small and adaptable: we can perform interchangeably with three acrobats so that, health permitting, I can step in from time to time. That is something I am becoming increasingly aware of: if you want to get respect, you have to dare to assert your worth.”

Penguins and other birds

In May 2020, Jesse’s life was hanging by a thread. “When the doctor called me with the news that I had corona, I wrote in my notebook: ‘The dormant partner that is fear has come’. I was the first CF patient in Belgium to contract COVID-19. Nobody knew how it would end. I and many people in my life thought ‘well, this is it, it was fun while it lasted, bye-bye!’ The first days were a physical hell but, after the fear, came the loneliness and boredom of the hospital. I was used to spending time in hospitals, but at least my friends would came over and we’d have a laugh. When you’re lying there with corona, all you see is penguins. That’s what I called the nurses, with their hoods and protective gowns. If it weren’t for their eyes showing, you wouldn’t know there was a person in there. After a while, the only thing I looked forward to was the little bird landing on a tree branch near my window at the same time every day. It was then that the idea came to me: ‘what if you could see a performance through your window, from your hospital bed? Rocio (Garotte, ed.), my circus partner and supporter, tempered my enthusiasm, saying: ‘Get well first and assume that you won’t be able to perform without extra oxygen anyway.’”

Her well-intentioned caution only galvanised Jesse’s ambitions further. “In that period, I was listening to a lot to slam poetry by French artists like Grand Corps Malade (Fabien Marsaud, ed.) and Gaël Faye. I found a lot of strength in their music. Their lyrics are also part of the show now. I have integrated my oxygen device as a necessary tool. That felt like failure at first, admitting that I can’t do it on my own anymore, but I have learned to see the device as a fellow performer. Occasionally, I have to pause in the performance to catch my breath and measure my oxygen saturation level. In the past, I would have glossed over that, but now that struggle is part of the performance. I don’t mind showing that it’s not all plain sailing. That’s life.” 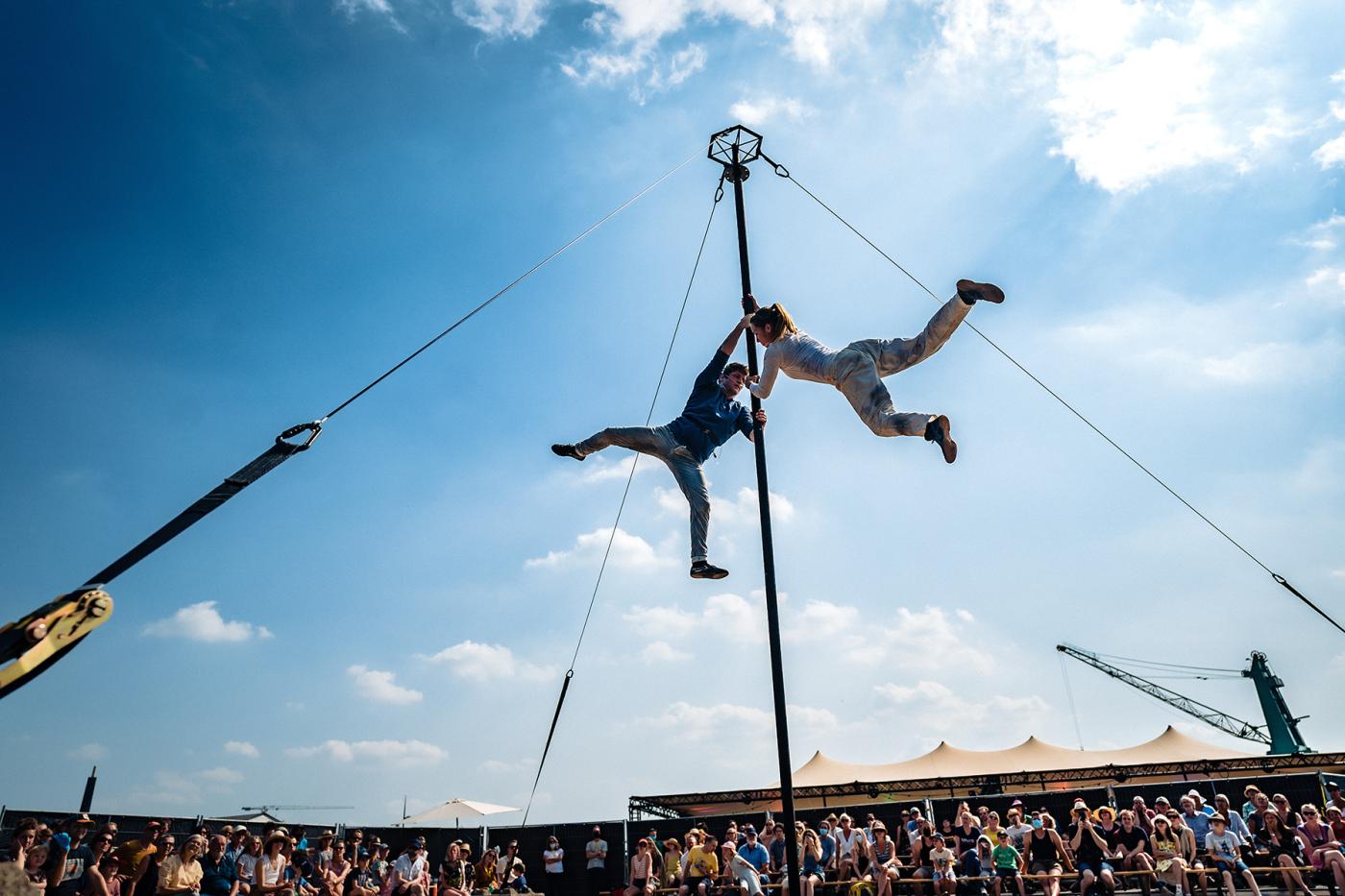 “The performance may be about a struggle that limits me personally, but I hope it transcends the individual story. The message is not ‘what is wrong with me?’, but ‘how do we deal with disabilities, as a society and among ourselves?’” The constantly present-yet-absent Rocio plays a crucial role on stage. She carries Jesse’s oxygen device, makes sure he doesn’t get tangled up in the cable, waits patiently for him to catch his breath, pulls him up when he is struggling. She is his physical and mental support. “Rocio’s identity is deliberately left vague because she is there in function of me, as is the case with many carers. After all, everything you do, and by extension who you are, is determined by the condition of the person you care for. That amount of commitment can be beautiful but it can also be harsh, because you almost erase yourself as an individual.”

Which is why Jesse wants to stage the show specifically for the care sector, for both the patients and the carers. He is developing a specific version for this, designed to be as mobile as possible. Literally: he has gone so far as to mount a Chinese pole on the back of a van so that he can perform anywhere: in hospital car parks, on the terraces of care homes or in a field by the dunes. He’s currently also working on a sound system for care facilities so that even those who are not sufficiently mobile can hear the musical score from their rooms and see the performance from their windows. In writing the text, Jesse is collaborating with the psychologist who has been counselling him for years at the Brussels hospital where he receives treatment. “I want to present a positive but nuanced story, without sugar-coating the reality. To show that it’s good to push your limits, but that it’s also okay to acknowledge that there are limitations and accept help when needed.”

While in the past the prognosis for CF was rather gloomy, in recent years, science has achieved promising results, such that, although there is still no cure, the disease is becoming easier to live with. “I started a new medication in May that works with genetic modulation. As a result, I have gone from 38 per cent lung capacity to – after the last test, three days ago – 59 per cent, so sometimes the oxygen machine is just a prop during the performance”, Jesse grins.

“When I was twelve years old I suffered from depression. When you are told that you will never reach 25, it has a serious effect on you, even if you are just a child. Since then, I have learned to embrace the expression ‘carpe diem’. And to reject other things. For example, I don’t need to save for retirement. I’ve also crossed the idea of having a partner or children off my list, because then you’d make them responsible for the pain you share. It’s only now that a silver lining appears on the horizon, the belief that there might be a longer life for me after all. I still seize the day, but I dare to hope for tomorrow.”