Lying on the grass with Circus Katoen

After the heavy sandbags of As heavy as it goes, Circus Katoen turns to a lighter material: grass. Willem and Sophie talk to us about their new creation Grasshoppers, the back injuries they sustained during their previous performance and what it’s like to live and create together as a couple. ‘During the lockdown, we continued rehearsing among the fruit trees in our garden’. 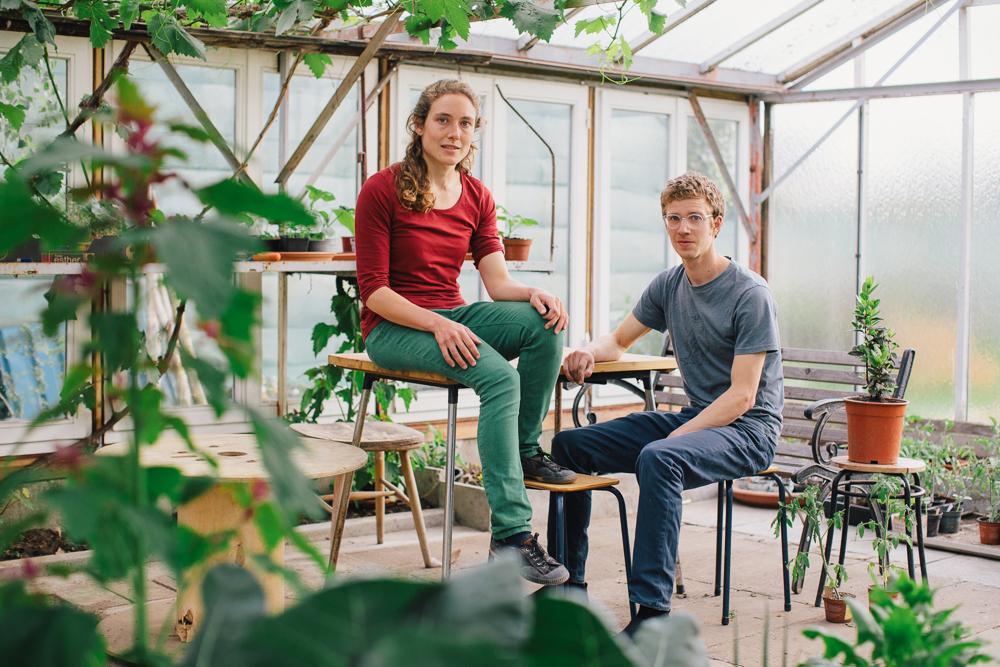 Life and work are inseparable for Sophie van der Vuurst de Vries (b. 1990) and Willem Balduyck (b. 1989). The two met at the Codarts circus school in Rotterdam, the city where Sophie was born. After their graduation in 2012, they founded Circus Katoen. Their first performance was a great success from the start and they would go on to present it almost 300 times over six years. Ex Aequo was about two characters who shack up together and try to find a place in the house for each of their things. It was inspired by their shared reality, having recently moved to Belgium together.

In 2017, they unveiled their second creation together. As heavy as it goes was a performance about the different aspects of physical labour, using 18 heavy sandbags as props. With this piece, Willem and Sophie earned a place among the 2015/2016 laureates of the renowned European talent programme CircusNext, giving their careers a further boost. Unfortunately the heavy sandbags took their toll on the artists, which meant that the performance was not long for this world.

However, it would take more than this setback for Willem and Sophie to throw in the towel. They moved right onto their next creation, Grasshoppers. We asked where they got the initial idea for this show. Long story, they said. It all started with a horse-and-cart expedition they undertook between late August and late October, 2019, from the West Flemish village of Lichtervelde to the French Ardennes and the High Fens. They finally returned home via Maastricht and the southern outskirts of Brussels.

Willem: “We needed a break after As heavy as it goes. We decided to take a year out and do something we would never do otherwise: travel around by horse and cart. About five years ago, I came across a circus in Slovenia that had horses, which is what sparked the idea for our trip. The plan started out very naive and romantic, but it turned out differently.”

Sophie: “We set aside six months to plan our six-month journey.”

Willem: “But the preparation ended up taking much longer. The horses we bought were untrained, so that took up a lot of time. You might imagine a horses to be quite docile, but when they’re stressed and their half-tonne weight is lurching forward at full speed, a lot can happen ... Plus we also needed training ourselves; we knew nothing about horses and carts. So we encountered a lot of delays and it was the end of summer before we were ready to depart. To make matters worse, it was impossible to relax in the beginning: on the very first night, just before we wanted to go to sleep, the horses escaped. After an event like that, it takes a while before you can sleep soundly.” (laughs)

Sophie: “We wanted to continue our creative practice along the way, but with it being such an intense trip, that wasn’t possible. Soon it was already autumn and too cold to rehearse. So we just finished the journey, without thinking too much about the creation process.”

Sounds challenging. What sparked your desire to mount such an expedition?

Sophie: “We wanted to travel with animals and live according to their rhythm. It’s a slower pace, which leads you to slow down, too. After As heavy as it goes, that really appealed to us.”

Willem: “We had converted a small trek cart, in which we also slept.”

Sophie: “We asked local residents if we could park it in their fields. I didn’t expect so many of them would be open to the idea. Passers-by also looked at us in amazement as we passed, some even applauded our beautiful horses.”

Willem: “Of course, there was the occasional irate driver ...”

Sophie: “... because we were also causing traffic jams on a regular basis.” (laughs) 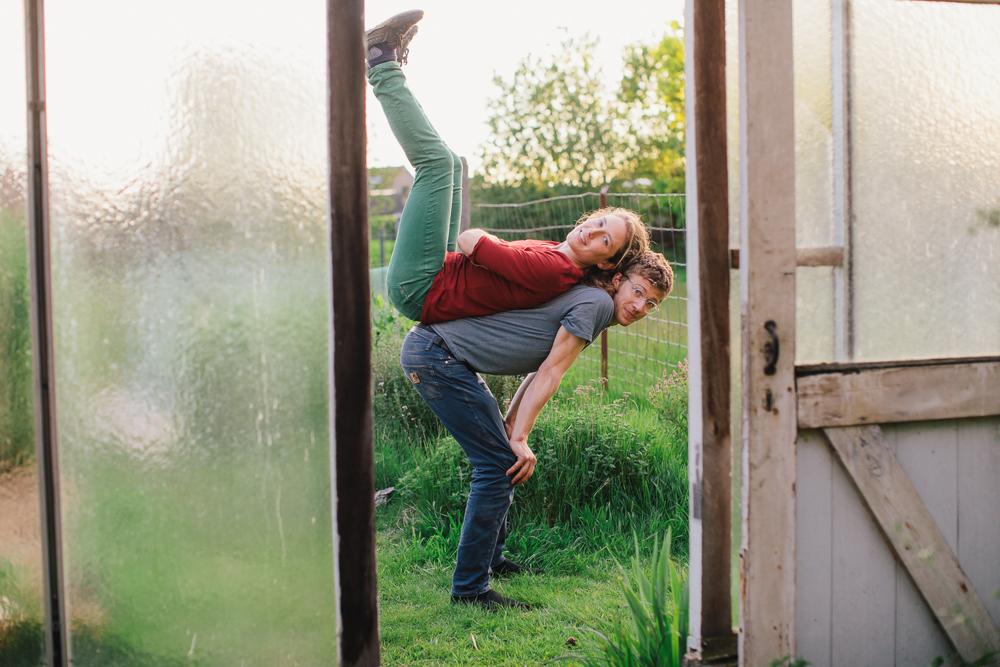 So, what exactly is the link between the trek and Grasshoppers?

Sophie: “As we travelled we were always on the lookout for a patch of grass to keep our horses fuelled up.”

Willem: “While travelling we realised how much we missed performing, so when we got back home we got straight back into it. Initially, we wanted to work with gardening tools, but it soon became apparent that we were more drawn to grass. We do a lot of gardening and vegetable growing, so we already had a love of plants and natural materials. So, we thought, why not take a piece of nature and do something with it? We went with turf: a rectangle of grass, the kind used to lay down a lawn. We pick them up from our favourite supplier: Het Grasboerke in Koolskamp.”

Sophie: “We only use one piece of turf per performance, because we want to keep things small. With 100 lengths of turf, you’d need a truck. We’d rather tour with our own car.”

That ecological theme has always been important to Circus Katoen. Is it also in the new show?

Willem: “The starting point conceptually was to show how humankind interacts with nature. But we don’t want to lay it on too thick. We prefer to let the audience’s imagination fill in the blanks. If all people see in it is us playing around with grass, that’s fine too.”

What kind of things did you try out with the grass?

Willem: “Everything really, in the beginning. Tearing the turf into pieces ...”

Sophie: “...throwing it around, stacking it, tying it up with string, swinging it around ...”

Willem: “...catapulting it, walking on it, putting it in people’s clothes... In the initial phase we wanted to try out all the possibilities, a through-line would follow later.”

Sophie: “We soon discovered that grass is very fragile. After a while, it starts to fall apart. At first we thought: hmm, not a good material to work with ... But soon we realised that this is what makes it interesting for our concept: nature is fragile and you’d better handle it very carefully.”

Willem: “In the winter you’ve got very wet turf, in the summer it can be extremely dry. So we need to develop a different methodology for that than for juggling clubs, for example, which you can just pick up from the ground after juggling.”

Willem: “We’re doing what we call object manipulation, which we see as a kind of juggling in its broadest sense. It’s not our aim to insert circus techniques per se, but there really are scenes in the show that you can only do with a background in juggling.”

How is this third show a step forward in your oeuvre?

Sophie: “In our first performance, we worked more from a place of naivety. We built on the circus disciplines we had acquired, such as handstands, diabolo spinning and partner acrobatics. In As heavy as it goes, we let go of that and started doing real object research with those sandbags. That’s the path we want to keep pursuing now.”

Willem: “You had to come to As heavy as it goes with somewhat more of a trained eye. We want to reach as many people as possible with Grasshoppers, which is why we are playing outdoor festivals again. Not everyone goes to the theatre, so we want to go to the people.”

How do you reconcile travelling abroad with your concerns for the environment?

Sophie: “That remains tricky. The show – people and materials – has to fit into a single car. We avoid flying. When we travel far, we always try to perform on multiple days and preferably we’ll add a few days to explore the country. We once went to Croatia: four days on the road to perform only once or twice. That was on the edge of acceptability, I felt, ecologically speaking.”

Willem: “Over the edge, even.”

Sophie: “We felt guilty about that afterwards.”

Willem: “One time – as an exception – we took a plane to South Korea to perform our first show. We did stay for a month, travelling and performing. It really has an impact on you, being immersed in another culture for such a long time. I don’t understand people who fly to the other end of the world and back for a daytrip. You need to take your time.”

Sophie: “We have already had to decline three requests for us to perform, for ecological reasons.”

Willem: “Three times? More than that!”

As a couple, was it easier to continue creating during the coronavirus pandemic?

Willem: “Yes, we were often the first residents to move in once a creation centre reopened and we also got a number of last-minute residences, just because we are already a bubble. We also have many other passions we were able to indulge in during the lockdown. Such as growing the tomatoes and bell peppers in our garden that are about ready now.” (laughs)

Willem: “Someone from our partner organisations asked us: ‘So, did you continue working after the last residency?’ We said: ‘You bet ... in the garden.’ To which she replied: ‘Ah, my husband is the same.’ But we did work on our performance, too.” (laughs)

Sophie: “We are lucky to have found a large, affordable place here in Zomergem: we’re renting an old farmhouse with a large, grassy field – around 100x50m. During the lockdown, we continued rehearsing among the fruit trees in our garden.” 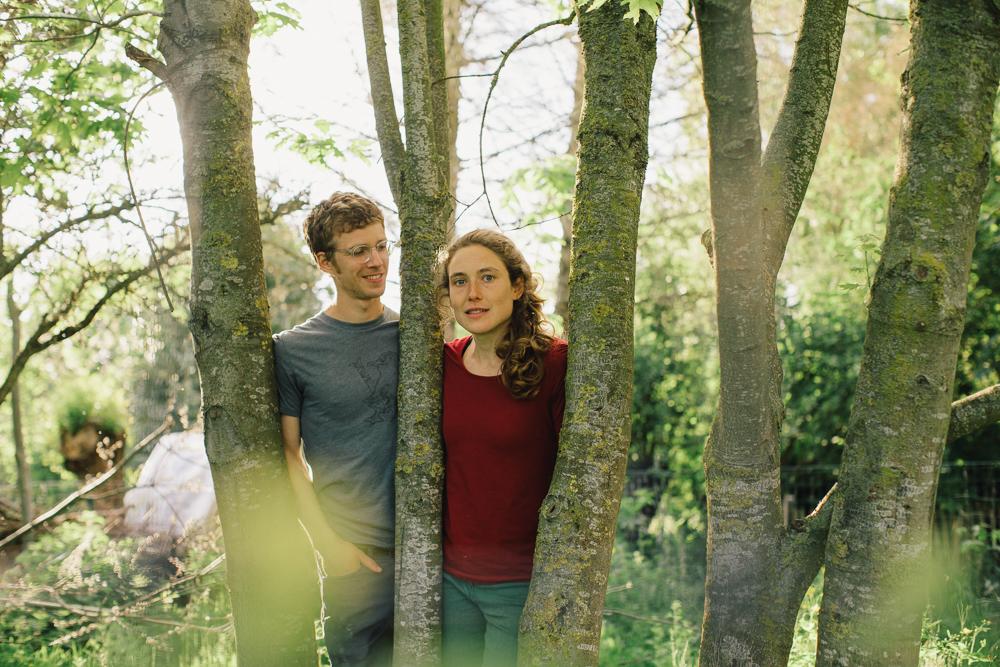 Do you manage to separate your work from your private life, or is it a blur?

Sophie: “I do feel that we’ve found a better balance through, don’t you? For example, we rehearse from nine to four, and then we let it go. Albeit now, with the premiere in sight, there are inevitably emails that still need to be answered.”

Willem: “Creative periods are all the more intense as a couple. With each new creation, we think: are we really going to go through all that again?”

Sophie: “Creating takes more energy than performing, because you keep thinking everything through in your head. Then again, we are very much perfectionists in that respect, of course.”

Are you complementary as a duo?

Willem: “Yes, we have different personalities. Sophie is a much more persistent person, whereas I’m a very restless type of person, I like variety. Even a week-long residency is hell for me: I hate be locked up somewhere. I start to feel mentally stuck after a while.”

Sophie: “That’s why we try not to let our rehearsal days drag on too long, so we can leave room for other activities.”

Finally, after your equestrian adventure, maybe you will venture into a circus show with horses or dressage?

Sophie: “Hmm, we’d rather not be lugging horses around in a trailer. That’s very different from trekking around by horse and cart.”

Willem: “My motivation to work with horses was mainly so as to be able to travel with them in a peaceful way. Not to mention, one time, following our trip, the horses bolted and we got into an accident. To be honest, it’s put me off working with horses for the time being.” (laughs)