Circus in his DNA, dancing in his blood, Vantournhout made his name on foreign stages even before Flanders really got to know him. Using his body, Alexander Vantournhout makes art that tells a story, in a language all his own. He likes to maintain an overview of the arts in Flanders and far beyond. What follows is a conversation with an artist who dares to define circus specifically and at the same time aims to hybridise different art forms. 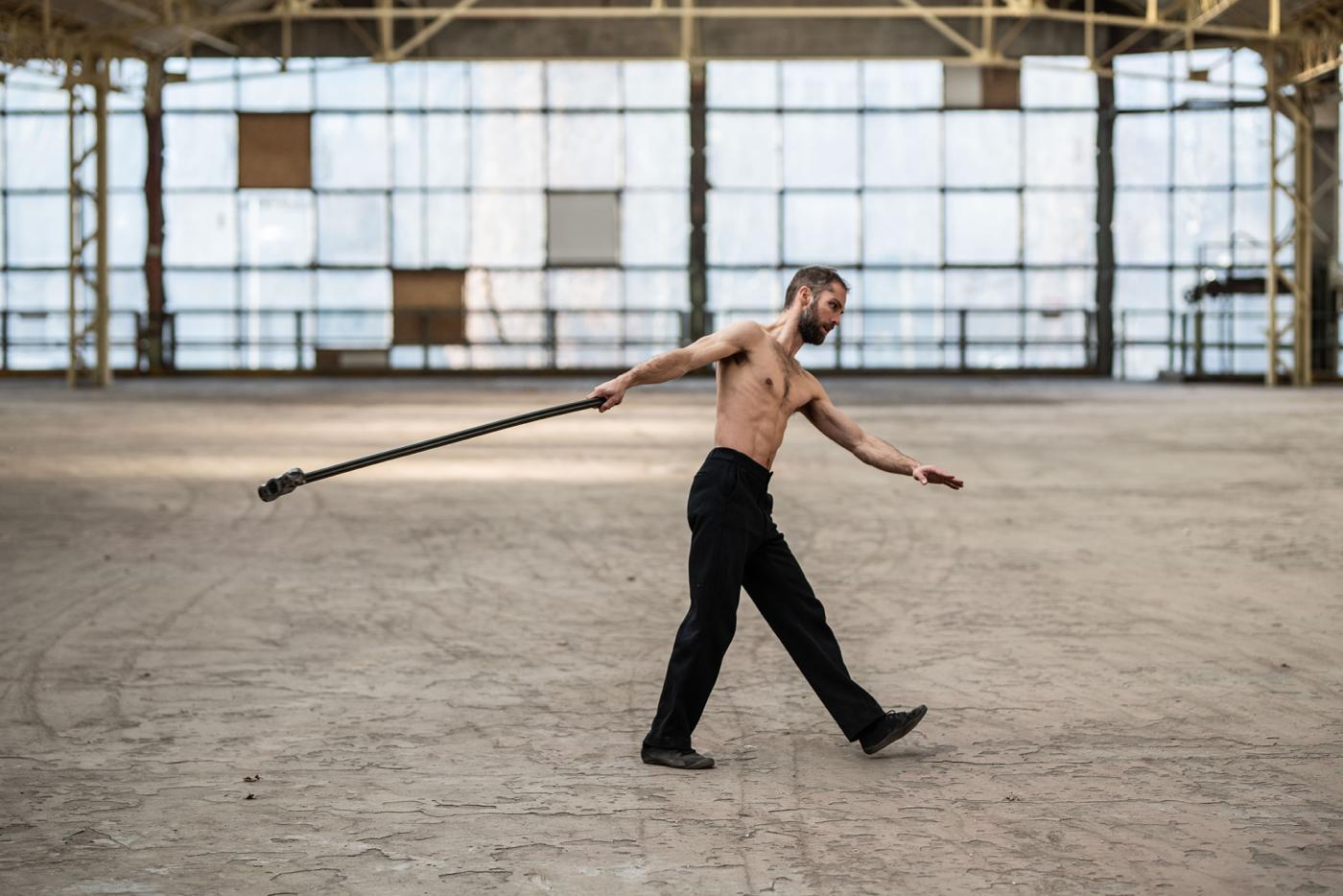 “In my latest show, VanThorhout, which has been touring since October 2022, I am once again alone on stage. It became a reflection on the object, in this case a special kind of hammer – one with a long handle and a stone at the end. A hammer is normally the symbol of strength, but this hammer is not. I do a rotating movement with the hammer that allows me to manipulate it. Or is the hammer manipulating me? Who influences whom? Each performance will be different, fifty minutes of silence, in the round, with special lighting – performance art rather than performing arts. But there’s always the possibility it will go wrong, which is again very typical for circus. If it can’t go wrong, it’s not circus.” 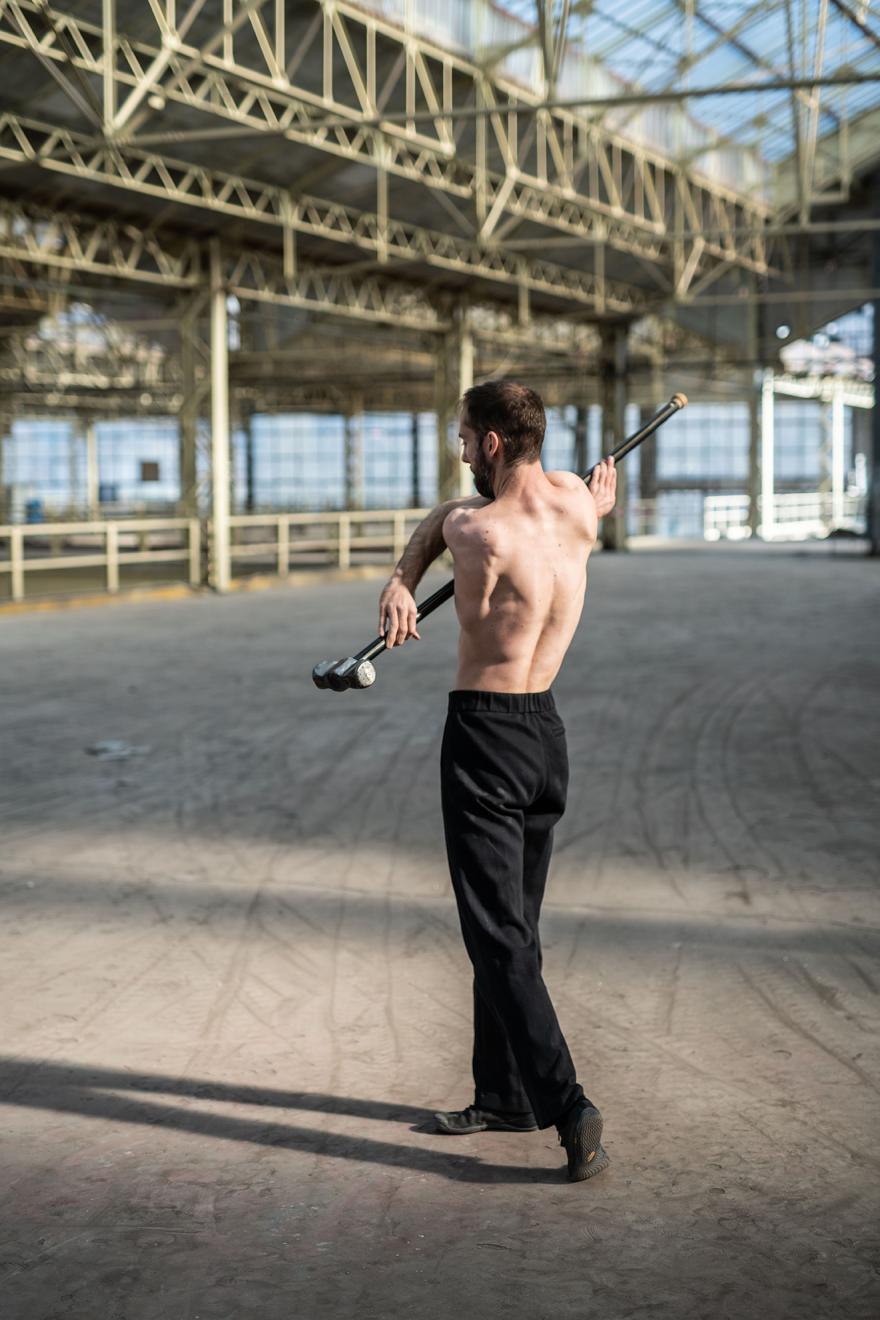 So, what you do is circus? That’s a question that’s often asked: is what you do circus? Or is it dance? Perhaps theatre?

“I think what I do can fall under any label: not this or that, but this and that. Circus – I actually prefer the word ‘circography’ – is in my DNA. Sometimes I move away from it, but with VanThorhout I’m getting a little closer again.  For me, circus can be defined as a non-collaborative art form in which the individual is ‘diversified’ by the other. The circus artist is always looking for what is original, what is outstanding, unlike a dancer, who performs something that already exists in a slightly new way. Circus is a strange thing.”

“The problem in Flanders is that we still define circus too narrowly, very differently from how they define it in France. I let programmers decide how to label my shows, because it very much depends on the prevailing culture of a place. In Germany, I would never be labelled as circus because there circus is still associated with variety acts. In Asia, the word circus makes them think of Peking opera, so it’s better not to put it under the label of ‘circus’ there, either. Everything depends on how the audience in question defines circus and dance.” 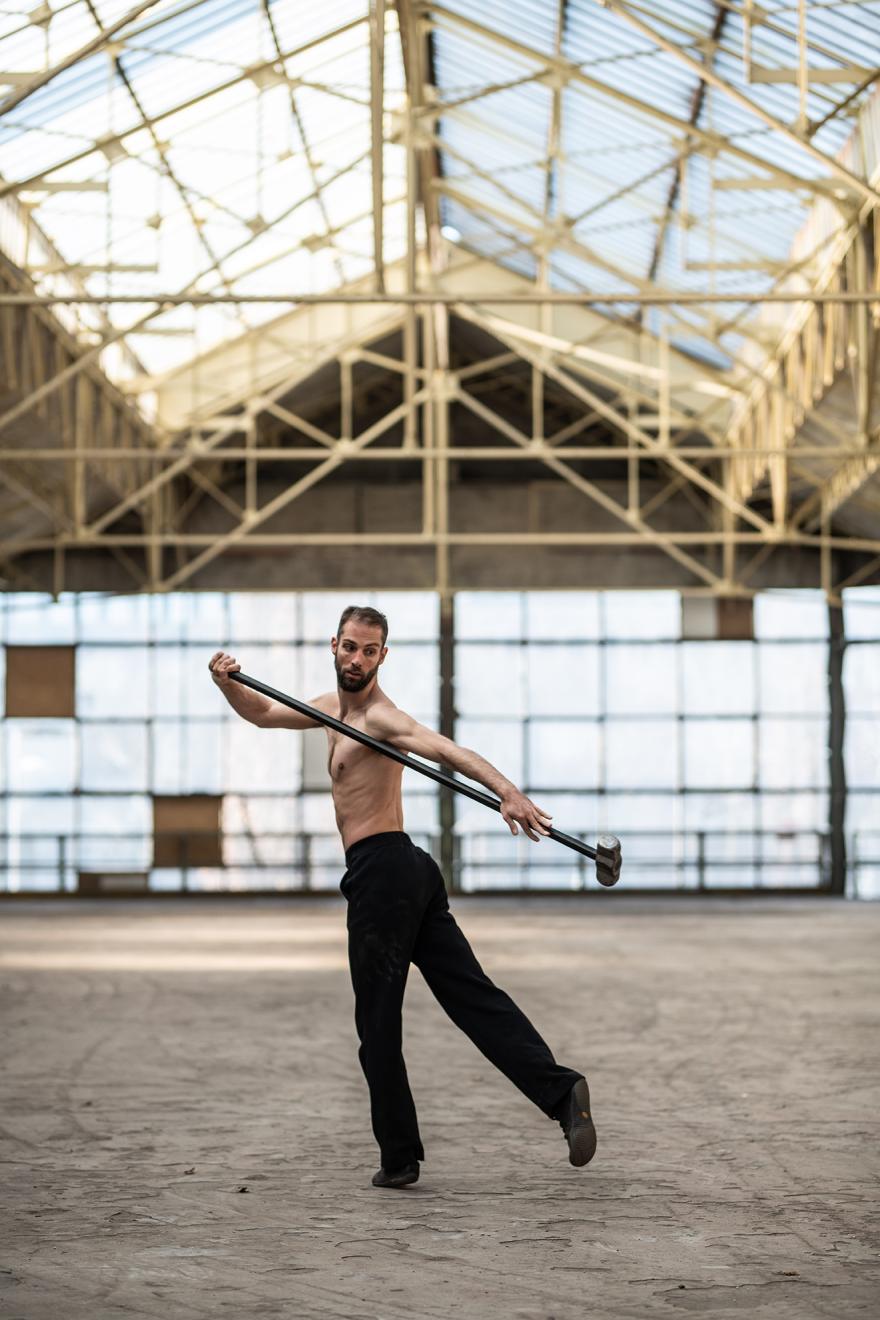 So France has a better approach? What can Flanders learn from France?

“It’s often the case that the Flemish circus world is still too unfamiliar with the world of the performing arts as omnipresent in our arts centres – dance, theatre, performance – and vice versa. I think we need to see more hybridisation from both sides. The Flemish circus sector has clearly been growing and professionalising over the past ten years, which we can only be pleased about, but, on the other hand, it is unfortunate that the circus sector is growing apart from the performing arts. Perhaps we should think less in terms of labels and more in terms of themes. For example: a festival where the theme of ‘migration’ is chosen first, and it’s only at the second stage of the planning where dance, theatre and circus performances are sought out in line with this theme. If we continue to bang the drum about circus exclusively, we will continue to isolate ourselves. It’s better to be open to the worlds of others. Why has Flanders never seen an opera performed with circus artists?”

Can foreign countries also learn something from the Flemish circus sector?

“Flanders has a lot of financial resources for circus. Just look at the youth circuses. There is no dance school as well equipped as the Flemish youth circuses are today. The Flemish artists are polyglots, which is another plus. The crux of the matter remains that in Flanders there are many resources for just a few artists. But, in truth, I learned more abroad. We created many shows that first played abroad and then came to Flanders. For example, Through the Grapevine had already been performed in nine other countries before it came to Brussels for the first time.”

Circus is a strange thing, it’s in my DNA

It was at PERPLX that I got my first opportunities, where I was allowed to turn an act into my first show. They were co-producers as I was a house artist there at PERPLX. There was a kind of unconditional trust and it felt good. PERPLX in Kortrijk was the closest creation centre to where I live and so it was the first I worked with. Others followed.

Nona was the first arts centre where we were resident artists. They supported us logistically. For example, they facilitated us in creating the tiered seating for the performance Raphaël. And it was mainly thanks to Nona that our performances received wider distribution.

The arts centre formerly known as Vooruit presented our work from the very beginning. About eight years ago, that was the place with the most progressive approach, presenting hybrid work and seeing beyond labels. For the second time now, I’ve been made a resident artist at Viernulvier for a five-year period, together with the company. It’s also the place where we also had our first office space. Their unflagging support in the early years really boosted our company.

This one is thanks to Yveline Rapeau in particular. After my studies at ESAC, we played a selection of three years’ worth of graduation projects. That’s where it started for me. I met Yveline and in the seven years that followed she programmed Aneckxander no fewer than five times. Thanks to her, I was able to perform in some remarkable places, such as the Festival D’Avignon. And SPRING has one of the best-equipped residency spaces, where they focus on a new form of circus.

This is a very special place: one of the leading Parisian arts centres and, like Viernulvier, they have a very open-minded view of the performing arts. So, they’re both places where I feel very much at home. Also very inspiring is their ‘open-door’ policy for casual passers-by and young artists: every day, around 200 to 300 people come together for rehearsals, people who practice a wide variety of art forms. I’ve been a resident artist there with the company for almost three years now, which is a long time by French standards. The latest show, VanThorhout, will premiere there in October 2022.

Theaterfestival and Theater aan Zee (BE)

Two places where our work has been celebrated. We were selected four times for the Theaterfestival, which had a snowball effect with regard to the spread of our company’s reputation. We also won a prize at Theater aan Zee. We try to spend at least one evening in Ostend every year during the summer.