Sinking Sideways on their firstborn, 'René'

‘Wipwap’. The Dutch word for see-saw is how ground acrobats Xenia Bannuscher and Dries Vanwalle have christened the movement they make as they roll back and forth on their spines. In June 2020, the two flew the nest of Codarts circus school in Rotterdam, where they specialised in acro-dance. This was also where they established the basis for their back roll, but it is with René, the very first performance from their company Sinking Sideways, that they are really getting into the swing of this movement. At their own pace. 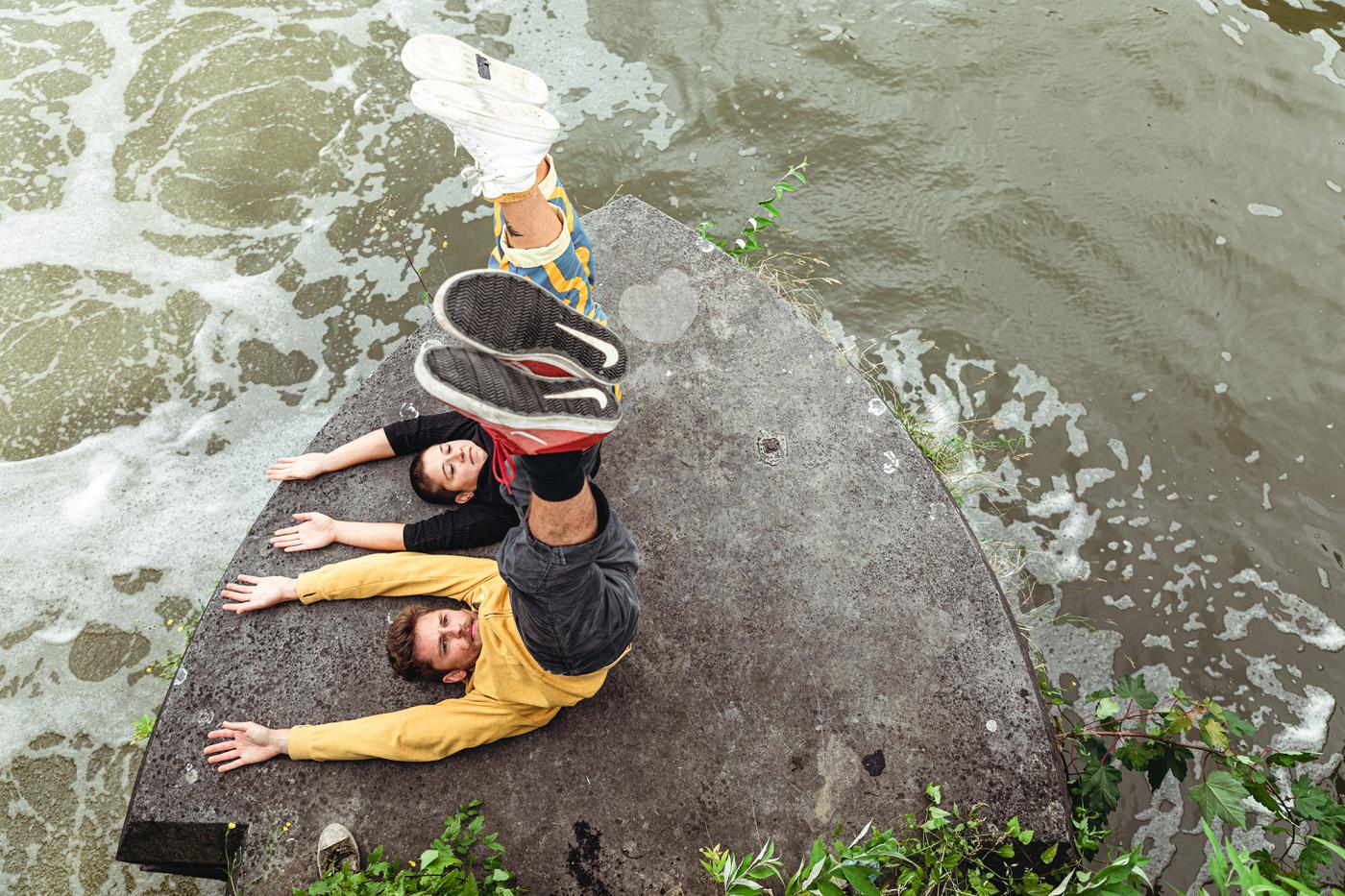 On Instagram they share photos of bruises that give their vertebrae a reptilian appearance. This will be a conversation of subtle striations. Narrow seams dividing pain and pleasure, silence and speech. And, for that matter, dance and circus.

Xenia Bannuscher: “To call what we do ‘dance’, would be to invite the question of what exactly that does or does not entail.”

Dries Vanwalle: “Our discipline is called acro-dance but that doesn’t really sit right with me: I don’t think I would ever dare call myself a dancer, even if I were to participate exclusively in dance performances and perform in exactly the same way as all the other dancers. Simply because I went to circus school and I don’t have a diploma as a dancer.”

Xenia: “Labelling it ‘dance’ would feel like taking the easy way out, in a way. Taking advantage of an art form that is already established. For me, it also has to do with my background and the art form I want to contribute to. Circus is evolving in so many different directions and it’s very satisfying to be a part of that evolution. Dancers could also have made this performance, but their path to get there would be so different.”

Standing in the wings, the two performers look on as the audience arrives in dribs and drabs. Small actions betray the duo’s desire for focus: hands that resist stillness, picking at a bobble in the mats. Then the two bodies enter the scene. A subtle nod communicates that it’s time for the first roll, which is held in the first position, legs in the air. And the two are still rolling forty minutes later. The rubber mats that are supposed to offer their spines some support have been squeaking along with their rhythms the whole time. Throughout the performance, their backs remain in contact with the ground. Literally and figuratively ‘grounded’. 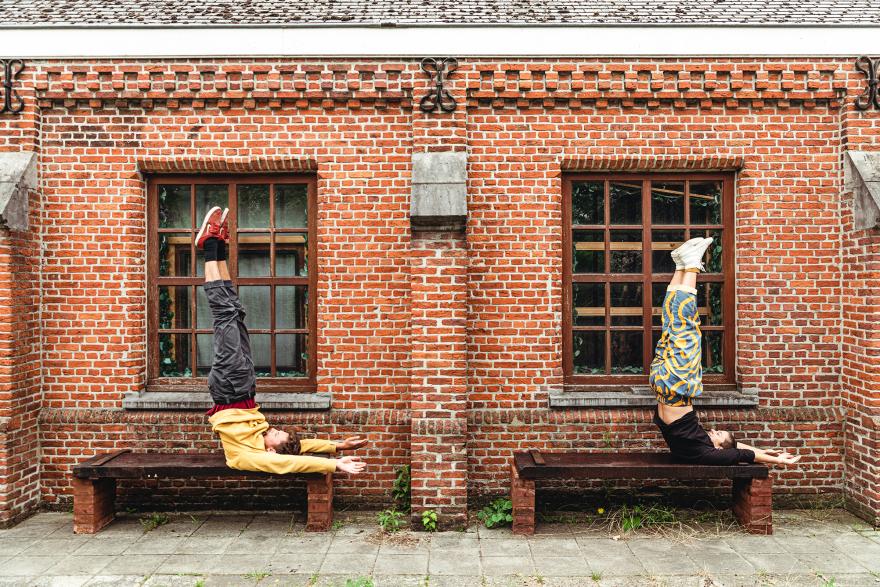 Xenia: “I think it’s inherent in what we do: seeking out the ground, meeting the ground.”

Dries: “We use our bodies to do that. I used to juggle, but I haven’t improvised with objects in a long time.”

Xenia: “There are no other props to work with, only the floor. Sometimes we wonder if it’s enough, if it’s ‘circus’ enough, but the focus is on simplicity. It forces us to use only the floor and not to move away from it by adding all kinds of other layers or elements. I feel much more vulnerable with a thing on stage that I then have to relate to.”

René revolves around repetition and synchronicity. How do you work towards that?

Dries: “So there’s a big difference in height. My arms are also very long, relatively speaking. Synchronicity is hard to achieve.”

Xenia: “Our two bodies function in a different way.”

Dries: “We film the rehearsals, or we observe each other, how the other performs the movement. Then I see, for example, that she pushes her legs up higher, or I position my arms differently, and we find a middle ground in the movement. Or I try to do it her way to find out the best way for both bodies to achieve the same movement. Once we figure that out, we’ll try to rehearse it that way.”

Xenia: “The music is based on the sound of a metronome, so we can sync the movements to that beat. But it will also happen that one of us will fall out of sync and the other person has to adapt.”

Dries: “The aspect of synchronicity is very important, but it’s also interesting to see how two different bodies move and where the differences lie in the same action. We repeat the movements again and again, so that people have time to notice the similarities and the differences. We don’t consciously magnify those differences, but they are there, in any case.”

Xenia: “For example, when we hunker down and swing our arms, Dries’s hands come down to the ground, because his arms are so long, while mine remain hanging in the air. It’s details like this, and the focus on something as small as a difference in arm length, that I would like to convey to the audience. I’d like to invite them to look at what lies hidden in the simplicity. So that, in the beginning, they might be like ‘are they really just going to roll around the whole time?’, feel a certain resistance to it, but then, after a while, get into a kind of trance. Then there is excitement to be found in even the smallest change we make in the endless repetition.”

The ways we deal with repetitiveness, is that what you’re digging into with this creation? 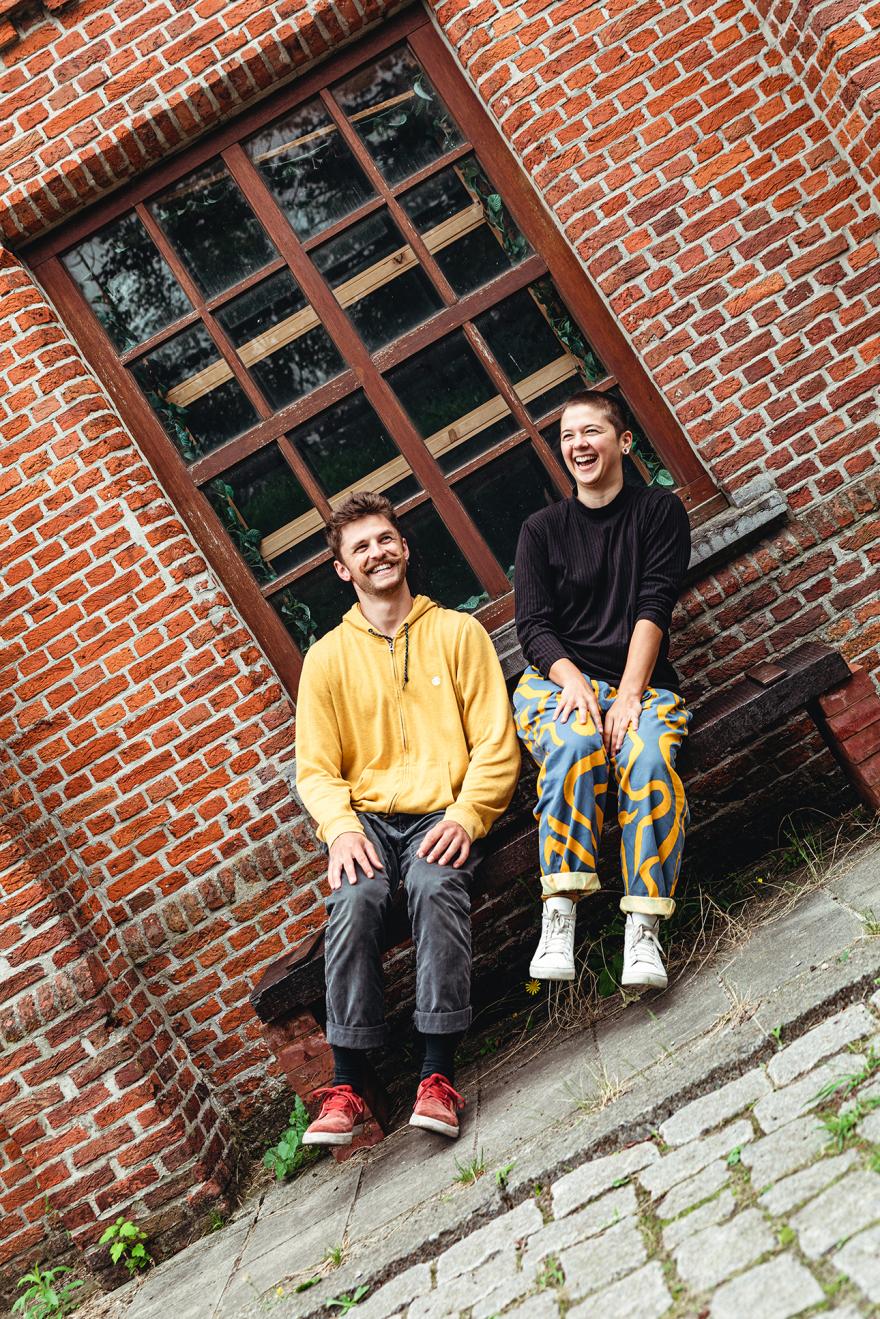 Dries: “It’s one of the themes we’re exploring.”

Xenia: “For me, it’s also about what circus is, or can be. It’s often said that circus is about risk. I think this also applies to what we do. Everything is choreographed. The risk lies in the mistakes we may make in the endless repetitions. But also in that repetition itself: some may find it very boring. And that’s totally fine, of course. Not everyone has to like it. But if you are willing to go along with it, the tension of the repetition and the risk that it carries are precisely what make it so interesting.”

Dries: “There is also the physical exhaustion of doing the same movement the whole time, for 40 uninterrupted minutes.”

Dries: “The see-saw movement itself is not that hard in itself, but after a while it does become exhausting.”

Xenia: “I really like repetition. I have the feeling it was me who steered it in that direction. I listen to the same songs on repeat, sometimes for as long as five hours, or I do repetitive actions like binding a book.”

Dries: “I don’t get that. I like the repetition in René, but listening to the same song for hours on end? Twice is already plenty for me.”

Xenia: “When we’re doing the performance, it’s really remarkable how you enter such a deep, trance-like concentration that your body continues doing the movements without you having to think about it. Then I can focus on how I hold my fingers, for example.”

Dries: “The body takes over.”

I saw images of bruises on your backs. What’s your relationship with pain?

Xenia: “I don’t experience it negatively. I’ve been doing sports all my life and I love to push my body to the point where it’s mastered something really well. Having said that, I don’t think that pain is necessarily part of circus. Suffering, perhaps, in a way: however you approach it, circus is ultimately about training and focus. And in this way you reach a point where you think you’re not good enough, or the endless repetition weighs you down. It’s a type of mental suffering. Unfortunately for us, this performance also involves physical pain.”

Dries: “In the beginning, we insisted on working without mats on the floor, so that we could tour with public transport. But my spine sticks out quite a bit, so I’m constantly rolling on it, and you roll on the muscles on the side of your back. After a while, it starts to burn.”

Xenia: “It can be very unhealthy, but I feel that we know how far to push ourselves. Working together, it feels very safe to indicate when one of us is tired, or in pain, and then we take a physical rest day, do computer work or talk things over. In a production by someone else, I would probably push myself further; in such cases I find it more difficult to admit that my body is suffering. But you look like you don’t agree?”

Dries: “I don’t know. I feel like I know how to take care of my body, but sometimes I just don’t stop. Even though I know it’s stupid to push it too far. You do that, too.”

Xenia: “We knew very well from the start the direction we wanted to take René and we had the same feelings and thoughts about it. There hasn’t been a point where our views of what it should be have been totally at odds, so we haven’t had to make any major compromises. It’s not like one of us wanted a clown to appear on stage at some point in the show.”

Sinking Sideways is actually a trio, not a duo. For their second creation, Cécile, Raff Pringuet joins the group.

Dries: “I know, but I would still like to replace it with another word one day.”